My six-month-old son was squirming restlessly so I scooped him up off the bed. His blue gray eyes looked curiously around the room and came to rest on a photo hanging on the wall. It was of a baby, with his little hand grasping my finger. He had never noticed it before so he stared at it. “That’s Joel,” I told him. Ethan turned and gazed at me. I felt the need to explain further. “That’s, well, that’s your older brother. He was my world, just like you are. I loved him when you weren’t even thought of. Actually, had he lived we probably wouldn’t even be having this conversation – because honestly you probably wouldn’t be here.” He glanced at the photo once more and then went back to his normal little activities, which included grabbing at everything in sight while speaking baby gibberish.

I patted Ethan’s dark curly hair and hugged him while looking at the photo of Joel with his light brown hair. I started noticing how very different my two boys are. Joel was the spitting image of his father at birth. He even had his fathers unique toes It actually looked like all I had contributed to him was my hair color. Ethan, on the other hand, looks so much like me. Joel was frail and very petite. Ethan, however, is robust – and he’s certainly not missing any meals. They are as different as night and day.

While it may be true that my sons are very different from each other, there is one thing they both have that’s identical. A mother who loves them no matter what. A mother that couldn’t wait to dress them up in cute outfits and show them off to the world. A mother who looked forward to their first day of school. A mother filled with hopes and dreams for their futures as responsible men. The desires I wished for my boys are the same, but only one will get the chance to fulfill them.

Sometimes I can’t help but wonder why one son gets all the opportunities life has to offer, and the other did not. It’s hard not to dwell on how Joel could have made the world a better place if he was still here. He made my life so happy in the short time I had with him. Joel was just as adored by all his family as Ethan is. Why did Joel get only two days on earth- and Ethan gets a lifetime? Why did Joel have to become just a memory so quickly?

Sometimes to help justify the pain I feel from missing out on motherhood with my firstborn, I focus on what I gained. Or rather what Ethan gained. Because Ethan gained a mother who truly knows how precious of a gift he is. And it’s a reminder I think of often – thanks to Joel. During those sleepless nights when Ethan just wants to cry and stay up, I remember how much my heart ached before I had Ethan, wishing Joel had stayed to keep me up endless nights. When Ethan just wants to cuddle but have things to do – and I feel annoyed; I remind myself how desperately I wished Joel could have taken up all my time.

Ethan has a mother who is probably more patient that I may have been with my firstborn.  I am happier to make the many sacrifices motherhood requires – even when they push me to my limits. And that is because because I knows how quiet and empty this home can be without my little boy to make those sacrifices for. When I see somebody suffering the loss of a child, I cannot make the arbitrary comment “I can’t imagine the pain of losing a child” – because I have lost a child. I do know that pain. And that pain helps makes every single sleepless night, exhausted day at work, and frustrating moment even more worth it.

When Ethan is older, I will tell him more about the brother he never got the chance to know. He did not get the gift of having his older brother to show him the ropes, be his best friend, and protect him from bullies. But what Ethan did receive from Joel, is a mother who hugs him a little tighter at night because she knows what it would feel like if he was not there. Ethan has a mother who wants him to have a childhood filled with many happy memories of him and his mom. I strive for that even more than I probably would have before, because I am so grateful that I get another chance to raise a child. Both of my sons have shaped me into the mother I am becoming. My Joel and Ethan, they made me who I am. Both of them have changed my life for the better through the gift of motherhood – and I wouldn’t have it any other way. 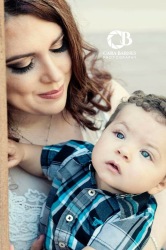 About Chrissy – Chrissy Storr lives in sunny Arizona. She attends college and is almost done with her nursing prerequisites. She also is a seamstress, and has become passionate about being healthy. She can be found at the gym on a regular basis and has completed several 5ks in the last year – including 3 while pregnant (even participating in one at 8 months) . She loves sharing about her sons, Joel and Ethan, and is the owner of a support group that offers assistance to mothers suffering from pPROM.